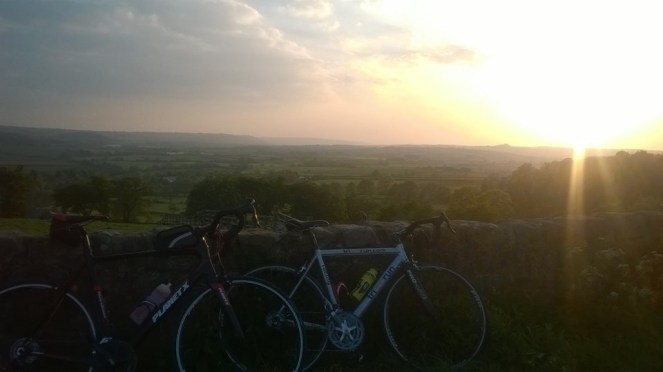 On Sunday my wonderful husband cycled 131.8 miles, including 6,200 feet of climbing, from Whitehaven to Sunderland. He was part of a dads coast to coast cycling challenge raising funds for our primary school. He was one of a team of 7 cyclists and 2 support drivers. These are the lessons I learnt.

You may have already read that Dan had not really been on a bike until March and with a knee injury and weighing in at almost 20 stone, he had not really exercised regularly either. The challenge ahead and to be ready in time was immense. There were those who doubted he would make it. That was never my worry; come hell or high water Dan would have got himself there. I knew that.

What we both found really interesting, is that prior to Sunday, the longest training ride that Dan had done was 63 miles, after which he was completely spent and it took him 2 days to recover. Yet on the day, 68 miles in, with another 63.5 miles to go, Dan felt fresh as a daisy….that first stage had been a breeze and he had plenty left in the tank. Onwards and upwards. So fascinating: the same distance which had previously stretched him to his limits had been easy, simply because he knew how much further he had to go. That 68 miles, was just the start: His mind knew and so his body knew what he had to do, and adjusted his strength and energy in line with the challenge.

Contrast this to the end of the ride. In Dan’s mind, once he hit Newcastle, he was only a few miles from the finish. Not so – there were still 15 miles to go. Having flown, been faster and stronger than he dared to believe, Dan hit a wall. His body had been lied to – it was ready for the end and so it started to shut it down. Every turn of the wheel, more and more painful, Dan’s motivation slumped.

Of course, the ride was going to get tough at some point, but it was literally like a switch. His mind and his body had been prepared to get 10 minutes beyond Newcastle and that was all it was prepared to do!

It just goes to show that what you think and believe really can manifest results and of course, the reverse. The power of belief; the law of attraction, whatever you want to call it; your mind is the most incredible tool.

2. You can be more than one version of yourself

The Dan who completed the coast to coast on Sunday was elite athlete Dan and a hero of success manuals everywhere. He was confident, focussed, determined, motivated, competitive, powerful, disciplined. Not because he completed it, but in the tone of his voice, the things he said, the things we discussed and because of the way he did it. Knowing Dan, he wasn’t a little bit determined, a little bit confident: he was 100% committed and was all of the above in all their glory.

He can be such a conundrum. A tale of two Dans. Everyday Dan is not these things; not often. He is many, many wonderful things but not these. Extreme Dan makes an appearance every now and then and I know he is in there, hidden away.

We have talked about it since. Imagine, if Dan took the same approach to health generally, to work generally, to his aspirations generally.

What is the powerful force that keeps Extreme Dan hidden, such that he only breaks out from time to time? I know Dan would like him to make more of an appearance and one of his aims after Sunday is to do just that.

Some might call reverting to Everyday Dan, comfortable Dan, as hitting Dan’s upper limit. Adopting self-limiting behaviour. We are going to work on that.

Our boys on Sunday and in the months before hand were an incredible team. The 7 cyclists ranged from my Dan, just beginning right up to our semi-professional cyclist, who competes regularly, has a coach and last year completed an Everest Challenge – look it up, it’s breath-taking. But those boys crossed the finish together on Sunday.

They have trained together, mapped a route together, created tactics together and they stuck together. Learning how to get each other through the challenge.

Dan and his particular team buddy were incredible. The boys have joked that from behind it looked like Dan was taking his son for a ride such is the difference in their physiques. Little and large! And yet, they were perfect together. Dan stronger on the flat pushing his buddy further between stops, his buddy, hanging back to stay close literally talking Dan up the hills.

Their support driver for the ride itself, on his own, shuttling between the three groups (they did a staggered start to reflect abilities and so they could finish together), taking care of all of them, making sure they were sustained, motivating and encouraging them.

To witness such a collaborative spirit, to see the genuine concern for all team mates and to know that it was all of them or none of them…well, it was humbling.

4. The power of brotherhood

Any of the dads reading this are probably already cringing, but I am going to say it anyway. The teamwork yesterday went beyond participating in a cycling challenge.

These boys actually have a real affection for one another. I’ll admit, they are not going to openly declare their love for each other the way mums might but they are really connected. Yes, they regress to teenage discourse and are merciless in their jokes and sarcasm, but when it comes down to it, they genuinely care. These dads lift each other and support one another. They praise and applaud each other’s achievements and if it came to it, their shoulders are there to be leant on. The bonds of their friendship are true and strong. Which brings me onto….

5. There is a time and place

So as the mums left at home tracked our husbands progress, some of us anxious, I began to feel dreadful that we were not there to cheer them on and that I was not being the supportive wife I like to be. Encouraged by my friends, with only the last stint to go, I threw the girls in the car and sped up to Sunderland, determined to make it to the finish line and greet my amazing husband as he finished his mammoth challenge. It was the stuff of all good Hollywood romantic comedies. He would be tearful, he would sweep me into his arms, I would stroke his hair, then we would embrace as a family; he would be so glad we were there. Dan and I are the couple who together, pre-kids, watched on repeat the High School Musical films and sang the duets in the car – it was the stuff our perfect endings are made of.

Only it wasn’t. No hugs, no tears, no laughing pats on the head for the children. Instead, barely a word, clear irritation with the kids, tangible awkwardness and only a half-hearted wave goodbye as heads down, the girls and I headed back to the car for home, alone.

I wasn’t angry. It was clear to me, why we were not wanted. Yes, I felt hurt and also a bit humiliated (I was right – I know now that the other dads felt pity for Dan and also relief that it was just me)….but I did get it. We were like cuckoos in the nest.

I completely misjudged the moment and after my initial wave of disappointment, a lesson that sometimes the loving thing is to let someone go, to give them their own moment, their own time. It’s not the ending I would choose but we are all different and perhaps I could have anticipated it better.

So next time, when the boys are thinking about cycling from London to Paris, maybe the other mums and I will take a mini break to Mallorca or Ibiza. Far away from the boys and their bonding. After 131 miles in one day, they all stank anyway!

View all posts by kerrytalks